This article is part of the BorderConnect PARS Software Guide.

This guide offers instructions on checking the status of your PARS shipments using BorderConnect's PARS checking software. It assumes that you have an active software subscription and that your RNS registration is complete. If you are not yet registered, please refer to the registration instructions.
How BorderConnect PARS works.

The most commonly used feature of the PARS checking software is the Newest Shipments listing, which displays the most recent shipments to be accepted or released. To access this listing, select the option 'Newest Shipments' under the 'PARS Shipments' menu.

This will bring you to the Newest Shipments Page, which consists of two main listings. The first listing is of PARS shipments that have been accepted by CBSA and are awaiting arrival at the border, but are not yet released. This listing is the most useful when you are trying to determine if your drivers are ready to cross the border. Any PARS submission by a customs broker will show up here once it is accepted by CBSA, provided that your carrier code was used in the PARS number.

For each accepted PARS, important information will be displayed, including:

From this listing, you can also click View on an individual shipment to be bring up some additional details about it, including the broker (if known), the service option the broker used to submit the PARS, the Sublocation, container numbers and delivery instructions. You will also have the option to add comments to the shipment for your users to refer back to, and to send a Status Query for the shipment.

The second listing is of shipments that have been released by CBSA, meaning they have crossed the border for PARS shipments or been authorized to be removed from the warehouse for inbond shipments. This listing useful for tracking your shipments to see when they crossed the border, and for making sure that each shipment gets put into released status. If you have a PARS from the accepted listing that does not move over to released and you know your driver has already crossed into Canada, it is important to follow up on the situation. 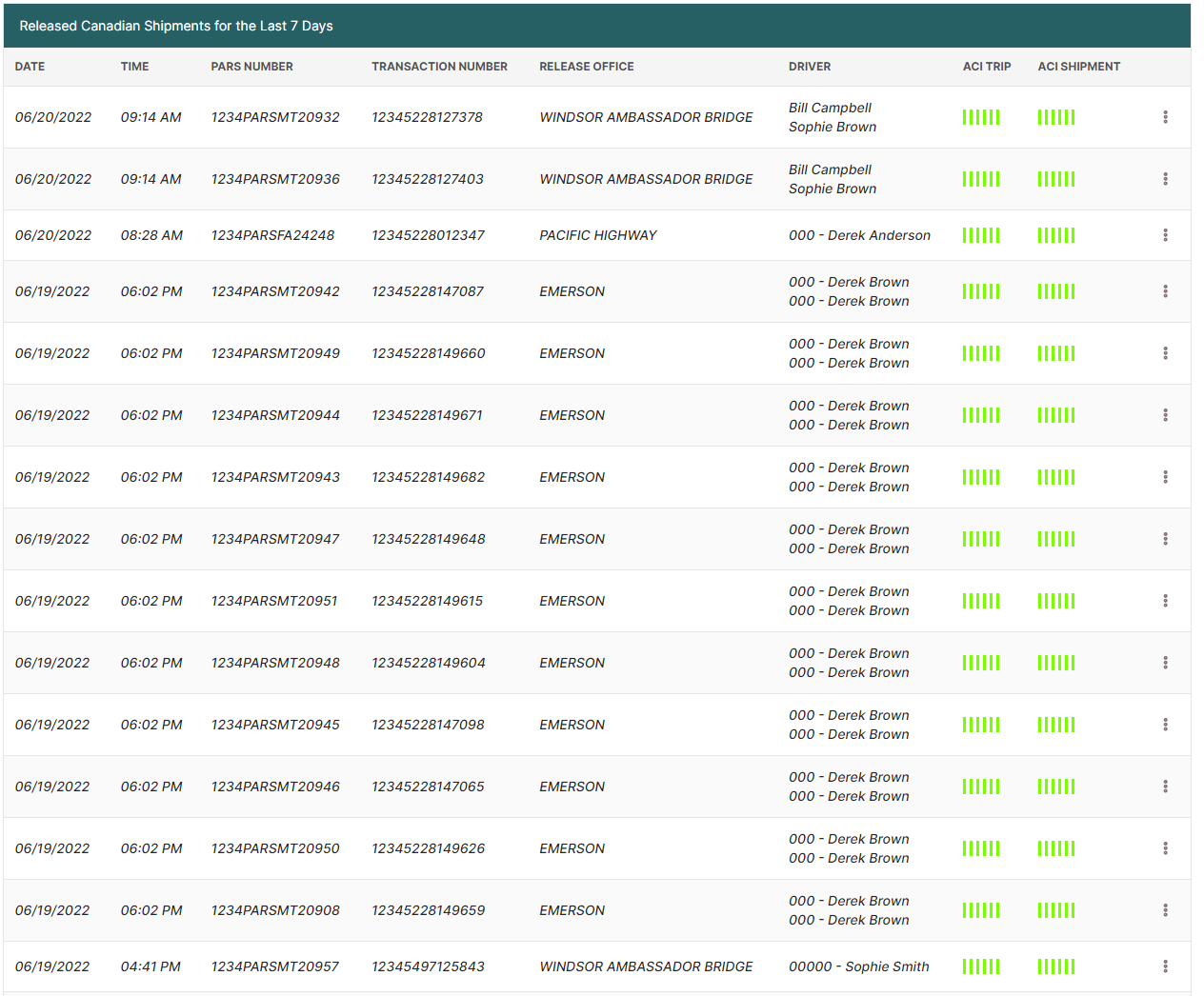 The information displayed for the released shipments will be the same as that displayed for the accepted shipments above, with the addition of the ability to print a Proof of Release. Clicking this link brings up a pdf of the Release Notification Report for the shipment. This report, because it is generated based on information received directly from CBSA, is considered a legal document and can be presented in cases in which the customs stamped paperwork has been lost.

This listing works exactly the same way as the Newest Shipments listing above, but only displays PARS shipments which are in accepted status. That is, those shipments that are set up by the broker and waiting for the driver to arrive at the border. To access this listing, select the option 'Accepted Shipments' under the 'PARS Shipments' menu.

This listing works exactly the same way as the Newest Shipments listing above, but only displays shipments which are in released status. That is, those shipments that have crossed the border or been authorized to be removed from a sufferance warehouse. To access this listing, select the option 'Released Shipments' under the 'PARS Shipments' menu.

This listing will display shipments which BorderConnect has marked as Purged. Shipments will be marked as Purged whenever an accepted PARS shipment hangs around for 30 days without showing released by CBSA, or whenever a response to a status query reveals a shipment to no longer be on file with CBSA. The list will display the same information about each shipment as detailed above under Newest Shipments. To access the list of purged shipments, select the option 'Purged Shipments' from the 'PARS Shipments' menu.

This listing works exactly the same way as the Newest Shipments listing above, but only displays shipments which have been released using the RMD service option. That is, those shipments that have been authorized to be removed from a sufferance warehouse or required a paper RMD package to be presented at the border. To access this listing, select the option 'Released Shipments' under the 'RMD Shipments' menu.