This article is part of the BorderConnect Shipment Type Guide.
How to create an In-Transit Shipment Through Canada.
An In Transit Manifest (CBSA Form A8B) controls the movement of goods moving from point to point in the US by transiting Canada. It is also processed as part of an ACI eManifest[1]

(1) At the first point of entry in Canada, the driver presents four copies of form A8B as follows:

(2) The customs inspector reviews and validates all copies by stamping and initiating each copy at the bottom of the form and may also check the goods against the bill(s) of lading, to ensure that all of the goods being moved in transit are recorded.

(3) When completed, three copies (blue, green, and pink) are returned to the driver, and the original (white) is placed in a pending file until acquittal is received from the United States customs office of entry. Acquitted copies are filed numerically.

(4) The goods are sealed with green ball seals that must remain intact until they are removed by United States CBP at the office of re-entry.

(5) The carrier reports to United States CBP before re-entering the United States. A U.S. CBP officer stamps the remaining three copies of the manifest; the pink copy is returned to the driver, the blue copy is sent to the office at the first point of entry, and the green copy is retained on file.

How to create an In-Transit Shipment Through the U.S.

To cross through the United States (Canada to Canada), the highway carrier must a bonded carrier and a Transportation and Exportation (T&E) bond must be filed. The bond can be processed as a QP In-Bond with a customs broker, or can be done directly through ACE as an ACE In-Bond.

The bond must then be accepted, then presented at the U.S. port of arrival. Once the bond has been authorized for movement into the U.S. and arrives at the port of exit in the U.S. the T&E In-Bond will then be closed and marked as "exported".

How To Process An In-Transit using ACI eManifest

(2) After the conveyance (trip) data has been entered, links will appear on the right-hand side of the truck or trailer. You can then assign an IIT or Cargo Exemption to the manifest. If the goods are loaded in a box truck or cargo van you will assign the cargo exemption or In-Transit to the truck, or if the goods are loaded in the trailer, assign the In-Transit exemption to the trailer. 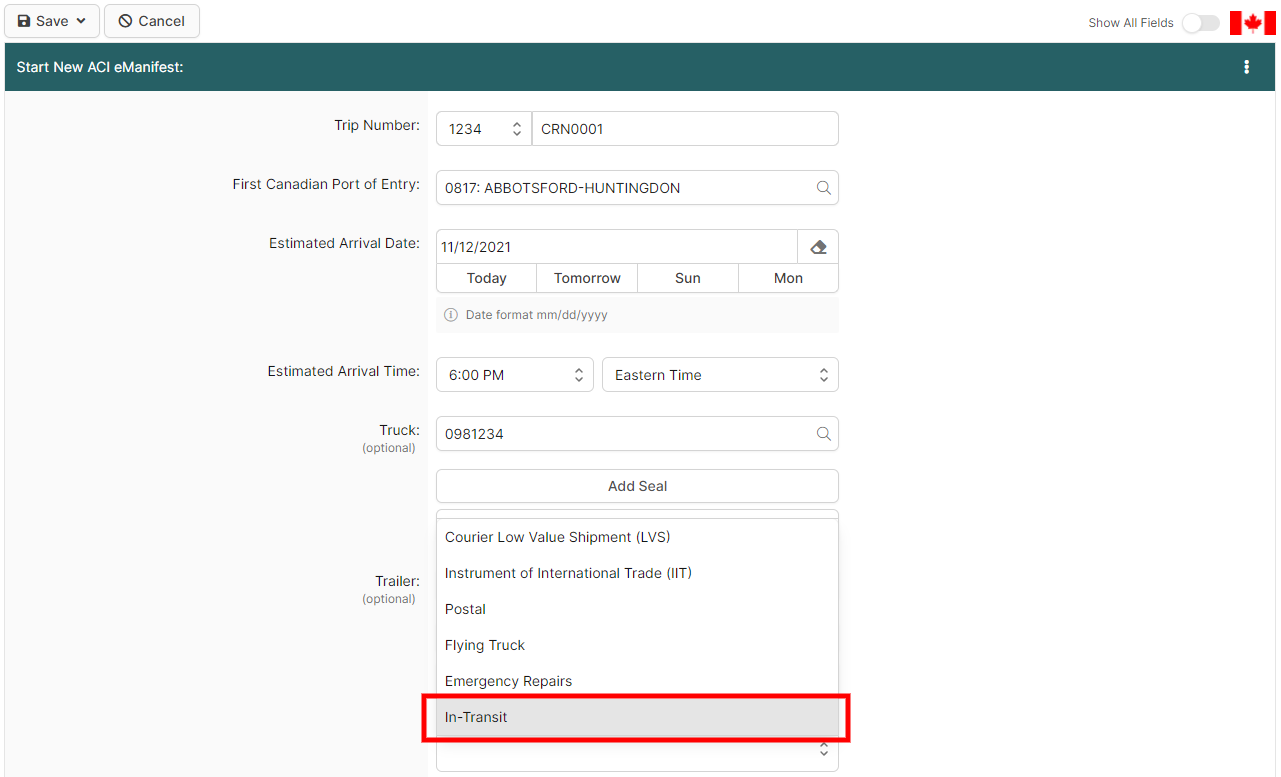